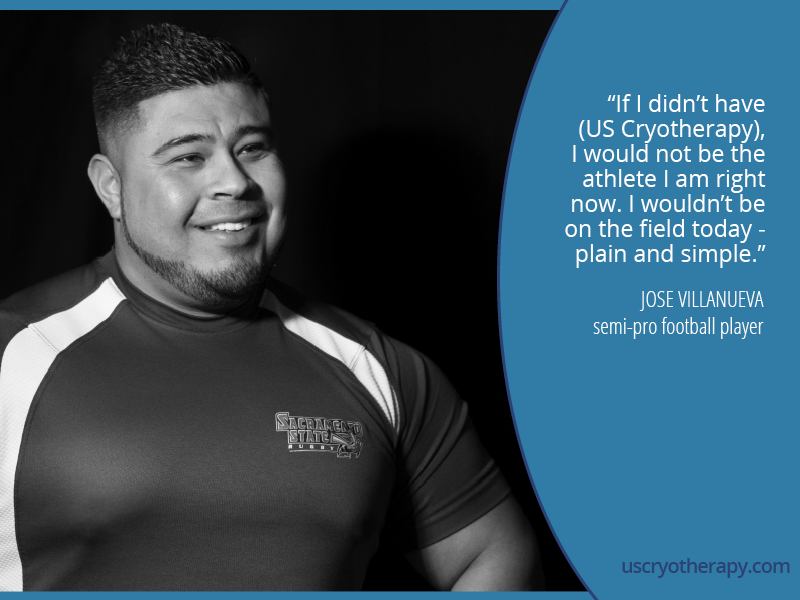 Semi-pro football player Jose Villanueva didn’t know how good he had it when he first experienced US Cryotherapy. At the time, he was injury free, pain-free and competent on the field.

“After that first treatment, I felt amazing,” he said. “Unfortunately, I didn’t follow through. I’m sure things would have been different if I had.”

“I believe my recovery time would have been cut in half had I used US Cryotherapy then,” Jose said of the first injury, a torn achilles that kept him off the field for several months.

His recovery routine for that injury consisted of ice baths and pain medication, which barely touched the pain and did nothing for inflammation, Jose said.

When he injured his knee soon after, Jose decided to empower his wellness and recovery with US Cryotherapy. It paid off, he said.

“With this knee injury – incorporating cryotherapy – I was back out on the feild in two weeks instead of six weeks as doctors predicted,” he said. “That’s because I did the right steps with US Cryotherapy, including consistent whole-body treatments, localized treatments and NormaTec.”

Jose continues to use US Cryotherapy three to five times a week for maintenance, injury prevention and performance enhancement.

“If I didn’t have US Cryotherapy, I would not be the athlete I am right now,” Jose said. “I wouldn’t be on the field today, plain and simple.”